The June issue of Szombat appears in a new format. This new format, however, continues to be accompanied by the all too familiar Financial problems. In his editorial, Gábor T. Szántó, editor-in-chief, pleads for support in order to keep the paper going.

“The Joint in planning to move out of Hungary, and the decrease of available funds can already be felt in several areas”, said Gusztáv Zoltai, the managing director of the Jewish Community at a fomm of the newly-elected community leadership.

In this issue we have included a report of the first finishing class of the Msoret Avot Orthodox Jewish School.

In the international section we have included György Szegő’s review of a major exhibition staged at the Vienna Town Hall that surveys the history of anti-Semitism in Austria and in Germany; also in this section is a report on a small Jewish community in Tunis whose synagogue has been active through the past 2000 years.

Israel is no longer a poor relativ in need of Financial support, but an affluent consumer society that no longer needs funds from Diaspora Jewry, was the final conclusion drawn by a group of youngsters from Europe and the US. They also concluded that the nature of the relationship between Israel and the Diaspora needs to be re-assessed.

Martin BubeFs Tales of the Hassidim is scheduied to appear soon. Some excerpts are here published, with an introduction by Ágoston Schmelovszky.

Also included in this issue are excerpts from Chaim Grade’s novel, The Yeshiva, together with an interview with his widow who speaks about the difficultis of caring for her husband’s spiritual legacy. 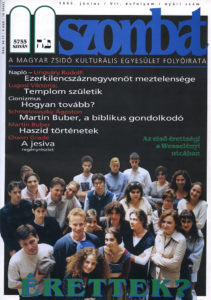