The June issue of Szombat begins with an essay by our editor-in-chief that he read on the occasion of the Day of Jewish Culture, as an introduction to the Szombat Szaloon; in the essay he underlines the general nood, and importance, for participation in all levels of Jewish life, for a deeper sense of responsibility that cannot be substituted by mere physical presence of „festive occasions”. We have included an all-round survey, of the Jewish community elections throughout Hungary and of the election campaigns, and we publish an interview with József Korn, the new president of the Budapest Jewish Community.

A survey of diverse Polish opinions on the Holocaust and a report on the videodocumentation workshop created by Steven Spielberg for survivors of the Shoah make up the Foreign Affairs column. „Is there a need for a new immigration law?” – is one of the problems besetting Israel at present, in consequence of the large-scale immigration of non-Jews.

Also in this issue is Yehuda Elberg’ s short story ’The power of a mincha’.

The second part of our special supplement, Jews and Comunism, features four studies on why the Jews were over-represented in the Communist movements, the underlying reasons and, also, its consequences. The fifth study probes the question of whether the Jews should feel any responsiblity for the crimes committed in the name of Communism.

György G. Kardos ’ Isareli trilogy, and especially his novel, Seven days in the life of Avraham Bogatir was a huge international literary success of a kind unusual in Hungarian literature. Kados is now seventy, and, after an absence of forty years, he retumed to Israel to revisit the landscapes and the places that inspired his novels. We have included his account of his trip, accompanied by Tamás Révész’s photos, and an essay by Gábor T. Szántó in which he analyzes Kardos’ oeuvre and its reception. 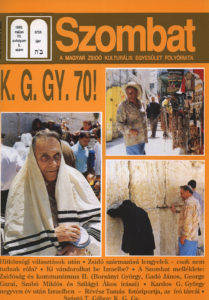