The April issue of Szombat begins with György Litván ’s diary, in which the renowned historian reminisces about the liberation of 1945 and, also, contemplates the current debates in which one opinion is that 1945 should simply be regarded as a change of oppressors.

We have included a report on the annual meeting of the Cultural Federation of Hungarian Jews, as well as on the ruling of the Constitutional Court, in which one of the Compensation bills passed by Hungarian Parliament has been amended: in consequence, survivors of the deportations and of the forced labour Services are now also eliglible for compensation. Tibor Szeszlér, an expert on legal matters, offers an in-depth analysis of this ruling. János Gadó has recently conducted a survey on Jewish religious life in Hungary and his sad conclusion is that in Hungary the “Jewish renaissance” seems hardly to have affected this arca.

Also included in this issue is a report on the Jewish schools in Moscow, as well as brief news items on current events in New York and Berlin.

The section on Israel features-on the hasis of a report originally published in Newsweek – a review of the ongoing debate between Israeli historians on the desirability of „airing Israel’s dirty linen” as far as the War of Independence and the first Israeli-Arab war is concemed. Alsó included in this section are some brief statistics on the role of religion in Israeli society and new economic developments.

Ágoston Schmelovszky has written our commemoration for Pesach. We publich the first part of a coUection of studies thatprobe the relation between Jews and Communism in Hungary: on these studies the Jews are depicted both as „victims” of, and, also as „collaborators” in establishing the Bolshevik dictatorship. „Neither an indictment, nor an apology”-writes Gábor T. Szántó in his introduction, einphasizing the need for unblased debate on the issue, that has hitherto been impeded by the anti-Semitism of the extreme right that has viewed Communism as the ’ Jews’ revenge’ Fascism on the one hand, and by a prevalent attitude among liberal historians (some of Jewish origins) according to which only a person who considers himself Jewish should be regarded as such-and the Bolhevilcs did not consider themselves to be Jews. The stuides in this month’s issue include a selection of documents on the brutality of the Russian troops against the survivors retuming form the deportations; Éva Standeisky’s essay on the post-war pogroms and the ’gold train’ that was to have carried the valuables of the deportees out of the country (that has still not been retumed to the Jewish community), the nationalization of the religious schools and the showcase trials against the Zionists. Mária Schmidt evokes the history of the planned trial against the ’Zionist doctors of Budapest’, whilst Miklós Szabó deals with the period following the 1956 uprising and the latent anti-Simitism of the Kádár-period.

We have included excerpts front Miklós Vámos ’ new novel, You only have one mother ’; the cultural section alsó features new poems by Géza Röhrig and book reviews.

The April issue of Szombat is illustrated by Gábor Szerényi’s graphics. 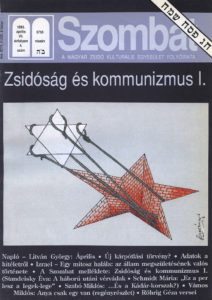