Gábor T. Szántó’s editorial Alternative” describes the new elements of the Jewish cultural scene in Budapest: the Jewish theatre, the Keset conference (the Hungarian Limmud) and a new cafe called „Sirály” (Seagull): “Here in Sirály they are going to have a small Jewish library upstairs, as well as a read­ing room, and they have promised to provide chess sets, cards and board games. This is a place. Just like the ones in Singer’s Warsaw, or on the Lower East Side in New York. ”

A poem by Géza Röhrig “istván angyal construction worker to kádár” brings back the memory of a Jewish fighter of the 1956 revolution, executed during János Kádár’s revenge after the defeat of the revolution.

We publish a selection of interesting articles on the past and present of Ethiopean Jews, in connection with a film by Radu Mihaileanu (Live & Become). Márton Csáki wrote a review, Andrea Sturovics publishes and comments on the relevant Jewish sources of the love affair of King Solomon and Queen of Sheba, and Péter Szegő tells the story of rescuing the Falasha into Israel.

After a trip to Vilnius and Tallin, János Gadó pays tribute to the memory of Jews in the Baltic region.

Zsuzsa Shiri reports on new development projects in the pub­lic transport system in Israel: on the construction of the new tramline in Jerusalem and plans to build a tramline in Tel-Aviv.

Péter Szegő reports on a roundtable discussion of baal tesuvah youths (returning to Jewish traditions) held in Sirály, organized by Marom, an organization for young Jews.

We publish an essay by Emmanuel Levinas.

„Cultural production – between thieves and politicians” is the title of an interview with Róbert Vajda, actor, stage director and leader of the Budapest Jewish Theatre.

József Keresztesi publishes a short story under the title: “The red chalk threshold of the Synagogue “. 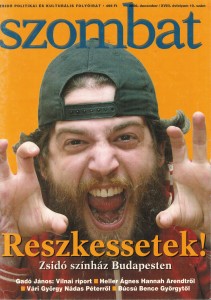 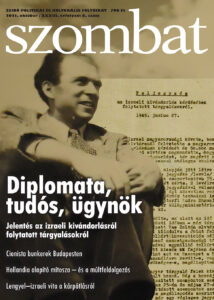