In connection with the “revolution” at Kossuth tér (demonstration outside the Parliament) János Gadó claims: ..Through the aggressive street demonstrations, the opposi­tion reflects a very bad picture of itself, not of the govern­ment. All this is a blow at democracy, because at the time of a lack of confidence and an economic crisis, each move by the government ought to be looked at in a thoroughly criti­cal manner.”

We publish the eloquent speech made by Tony Blair before the very end of the war in Lebanon, about the war of values.

We publish an article by Claudia Roden (Couscous or Gefilte Fist, with the permission of the the Jewish Quarterly) about Israeli gastronomy. „In Tel Aviv every­body is out and about in the evenings, the city is full of restaurants and they are packed and buzzing with noise and activity.”

In our series on the Jewish communities of the newest EU member states, Péter Szegő reports on the life of the very small Slovenian community.

Zou can read an interview with Eszter Lányi, one of the leaders of Haver Foundation, and Csaba Kürti, owner and operator of a dating website: jmpoint.hu. Having worked together with two previous leaders of MAZSIHISZ (Association of Jewish Communities of Hungary), Eszter Lányi says: “I was never allowed to work at my own pace, plus new initiatives always had to be carefully presented so that they ‘get passed’, and on the long run all this became very demanding…It is difficult to cope, when you are aware of what issues are in focus in the international Jewish com­munity, yet here in Hungary they act as if MAZSIHISZ and the synagogue were the community itself.”

Ágnes Heller writes about the changes in the Jewish novel.

In an interview to Szombat, Uri Asaf, an Israeli poet and painter living in Budapest and writing in Hungarian said: „The mother tongue is a terribly sensitive thing: it is like playing Mozart is for a musician. When interpreting Mozart – like on a piece of skin under sharp light – all the tiny faults, defects will show. This is how it is with writing: those who dare to write in a language other than their mother tongue, will fail.” We also publish poems and pictures by Uri Asaf.

In our culinary section our author, dibbuk tells the readers about Salamon, the orthodox kosher restaurant in Budapest. 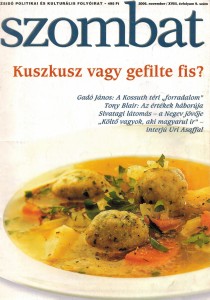