The first section of this month’s issue of Szombat is dominated by the Israel-Lebanon conflict: two different viewpoints are presented. György Konrád claims in his essay under the title ’’What may come after the rockets? More rockets?”: ”Perhaps radical Islamists find the existence of the state of Israel unacceptable. But why should thinking people living in Muslim countries become spiritual captives of radi­cal Islam? And why should thinking people in Christian countries become spiritual captives of radical Islamism? There is no moral obligation to understand anti-Semitism.”

Attila Novák examines the conflict in a different context, and – among other issues – analyses the foreign policy of the United States and the Israeli behavior. He criticizes the point of view of the galut, always aligning with Israeli politics: ”A legitimate – one could say “normal”- criticism of Israel may become neglected, though this is a condition for Israel to be considered – in political terms – just like any other nation. If you like, the original aims of Zionism, its „normalizing” function, is threatened now as a result of the „useful” efforts of many.”

Ágnes Heller wrote about her experiences during her trip to Iran before the war broke out between Israel and Lebanon.

Tamás Dési and János Gadó analyze the failures and conclusions of the signature-collection for the registration of a Jewish ethnic minority in Hungary. As it has become publicly known, the organiz­ers were not able to collect the necessary one thousand signatures.

János Gadó wrote about why the Hungarian Jewish Heritage Fund Public Endowment – originally created to distribute the money relat­ed to the compensation of Hungarian Jews – has become dysfunc­tional. “The last time the Board of Trustees was able to gather enough members was in March this year. But they were not able to assess all the applications handed in through 2005, so there are still a 167 applications waiting to be examined, along with 24,2 million forints to be distributed. There are some 400 people with early retire­ment for health reasons who are also waiting for the next session of the Board to approve their pension-supplements. “Because of the absence of several curators the Board is not capable of gathering. The article is followed by a financial analysis by László Korányi exam­ining the decisions, the proportions of supported causes and organi­zations in the last seven years of the organizations operation.

Péter Szegő was the author of the next piece in our series on the Jewish communities in Central and Eastern Europe: he reports on his trip to Krakow, and talks about – among others – the annual Jewish Festival.

“The Price of Messiahnism” is the title of an essay by Jacob Taubes Jewish German philosopher.

We publish an interview with the well-known psychiatrist-psy­chologist, András Feldmár, who – when asked about Jewish tradi­tion and his own psychological practice – replied: “The most sig­nificant element in Jewish heritage is that even questions asked by children should be taken seriously, and rabbis, too keep thinking about the meaning of this or that. Freud interpreted dreams, symp­toms like a rabbi reads the Talmud.”

In our culture section we publish poems by contemporary Israeli woman poets, and an interview with Judit Fenákel Hungarian Jewish writer, survivor of the Shoah, who talks about her home­lessness in present day Hungary. We also publish the winning piece in the short story-competition for secondary school students orga­nized by our magazine. 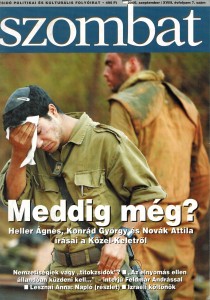 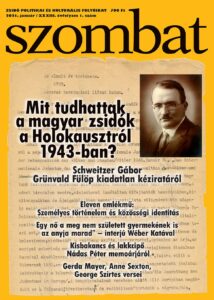