The January issue of Szombat begins with an essay by Ferenc Erős and Zoltán Fábián in which they examine current political anti-Semitism in Hungary among the voters of the parties running in the 1994 parliamentary electors. In the report on the generál assembly of the Jewish Community we have focused on the health, welfare and educational institutions of the community and, also, on the conflicts over the Jewish Restitution Fund that have led to delays in communal compensation.

Iván Simon addresses the issue of why Hungarian Jewry is represented by non-Hungarians in various intemational organizations and in negotiations with the Hungarian govemment in matters of restitution and compensation.

Imre Szekeres, the leader of the largest parliamentary faction, the Hungarian Sodalist Party, was a recent guest of the Cultural Federation of Hungarian Jews, and spoke about the perspectives of community and indi vidual compensation, and about a proposed new bili that would make the denial of the Holocaust a criminal offense.

In an interview given to Gábor T. Szántó, György Gadó, a former MP who before the political changes edited a Jewish samizdat and was a prominent human rights activist, speaks about his life.

The European Council of Jewish Communities held its meeting in Budapest; in an interview given to Szombat by Alexander Frenkel, the leader of the St. Petersburg commu­nity, and Mikhail Chlenov, one of the leaders of VAAD reflect on the criücism on their activity.

Also included in the month’s issue is an overview of Israel’s economy and changing society, and the concomitant changes in outlook and attitudes, as well the signs of the occasional conflict. Yossi Beilin is lobbyin the American Jewish leaders as part of his campaign to renew intemational Jewish organizations. During his visit to Budapest Shimon Peres briefly commented on Berlin’s activities.

Martin Buber’s essay, ”What are we to do about the Ten Commandments?” is the focal point of our section on Jewish tradition.

In our section on history we have published Margit Tevan ’s ghetto diary from 1944 and an interview made with György Aczél 1989, in which the former Communist party leader evokes the cooperation between Communists and Zionists in the 1944 resistance movement.

Excerpts from Raphael Seligmann’s novel and a report on the German Jewish writer’s visit to Budapest, as well as an interview made by Ágnes Horváth and Charles Fenyvesi with József Jakovits and, sadly, his necrology are featured in the cultural section. The January issue of Szombat is illustrated by reproduction of his paintings and sculptures. 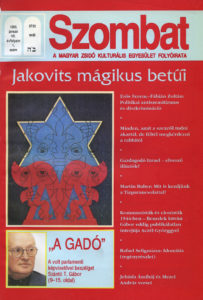