Parliamentary elections will be held both in Israel and Hungary. Attila Novák warns that the feeling of fear spread­ing among Hungarian Jews interprets the word ’’solidarity” as an excluding one.

János Gadó wrote about the murdered young Jewish Frenchman Ilan Halimi, as well as about the background of the murder. In connection with the incident, András Petőcz interviewed Marc Knobel, representative of the French Jewish organisation (CRIF) in Paris.

We publish an interview with Szabolcs Szita, leading his­torian at the Holocaust Documentary Center and Collection of Memoirs in Budapest. Mr. Szita explained: “It is out of moral dedication that I deal with the Holocaust.”

In his article, György Konrád examines how deportations – these collective and absurd tools of punishment, mainly used in the 20th century – can be compared to each other. ”The Nazi deportations did not justify the forceful resettle­ment of Swabian people. The act was similar, yet the perpe­trators and the victims were not the same. The administra­tive personnel of the resettlement of the Swabian population was mostly the same as the ones in charge of carrying out the deportation of Jews. ”

An agitated debate was created when György Vári and András Lányi exchanged their views on the attempt to create an ethnic minority out of the Jewish community in Hungary.

In an essay under the title “Judaism”, a recently deceased French philosopher, Emmanuel Levinas claimed: ”For those millions of Jews assimilated by the societies surrounding them, Judaism cannot even be referred to as a culture: it is no more then some vague sensibility, made up from various thoughts, memories, customs and feelings, mixed with a sense of solidarity towards those persecuted because of their Jewish origins.”

The American Jewish author, Melvin Jules Bukiet wrote about the second and third generation of Holocaust-sur­vivors under the title: ‘‘Nothing makes you free”.

Trembling before G-D was the title of the film shown recently in Budapest, dealing with homosexuality among orthodox Jews. Vera Surányi interviewed the creators of the film, and György Kozma commented on it the following way: “It is indeed cruel to humiliate someone for a behav­iour that is not directly harmful for others. At the same time it is not enough to repeal the well-known liberal point of view which claims the orthodox tradition is too conservative if it is expects its gay followers to be abstinent. Perhaps it would be worth to show objectively the orthodox rabbis’ arguments as well.” 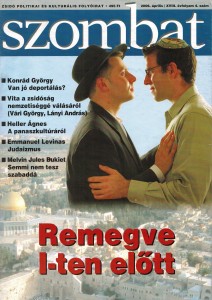