Péter Szegő’s editorial deals with the danger the Iranian president’s public statement means: he denied the Holocaust and called for the destruction of Israel. Szegő believes that “if Iran should become a nuclear power, it will be unpredictable whether they will attack Israel. ”

Pál Várnai interviewed Peter Popper, the renowned psychologist. Commenting on the present situation of the Hungarian Jewish commu­nity and on anti-Semitism, Popper said: “The Jews have a responsibili­ty even today, because it is not only the Hungarian state’s responsibili­ty, but that of the local Jews as well, that there is a hundred thousand Jews living in Budapest, yet they get called names, and older Jews get attacked and provoked without the attackers having to worry about tough retaliation from younger Jews – like it happened in Rome when a fascist demonstration was put down by young Jews in a way that the fas­cists do not dare to come out to the streets ever since. I do not think Jews should necessarily give in.”

Ágnes Heller, philosopher deals with the issue of Jews becoming an ethnic minority: she criticizes both the opposing views and those in favor: “Hungarian Jews and Jews living in Hungary can not be represented by the Neolog community, and some sort of ethnic self-government would be even less capable to do so. Hungarian Jews are diverse and varied. Being a Hungarian Jew means something different to everyone.”

András Lánczi philosophy-historian expressed his views on Hungarian conservatism, and said: “I believe that it is much better when someone argues about something from an identity point of view, and the other person has a definite identity too, then doing the same as a member of a group which is dissolving in mass society, struggling to find its identity in the flow of history.”

We publish a piece by Franz Rosenzweig: New Jewish Learning. written in 1920 on the occasion of the opening of the Free Jewish School: “It is not //connections// between Jews and non-Jews that need to be produced: enough of this has been done. It is not an apologetic dis­course that is needed. We need to find an entrance into the heart of our lives. And trust that this is a Jewish heart. Because we are Jewish.”

Márton Csáki interviewed Ádám Tábor poet, son of the philosopher Béla Tábor. This is what the poet said about his father: “he examined the so-called ‘Jewisli issue’ from an intellectual point of view, yet he was fully aware of the fact that a Jewish person can only interpret the intellect as he absorbed it: as a Jew. Although by that time they had a biblical-dialogical basis, under the influence of the Jewish Rosenzweig and the Christian Ferdinand Ebner… My father believed in the primacy of the word – along with the other indispens­able media, so perhaps this is my deepest Jewish and parental inheritance. ”

Ernő Szilágyi, the ex-Zionist and conservative author claimed in an essay: Aliy ah published in 1943: “This is a Hebrew word, which has become a notion. Through its development into a notion, it gradually lost its original pure and strict interpretation. Times luive revaluated it. The Jewish tragedy has added a series of new elements to it. so the natural and unavoidable revaluation become a devaluation. The beautiful and strict demand the Aliya li meant for those preparing for the long journey, became pity. Szilágyi’s essay is followed by Attila Novak’s study.

We publish the program of Szombat’s two-day conference on 21-22 January under the title “New Anti-Semitism’’. 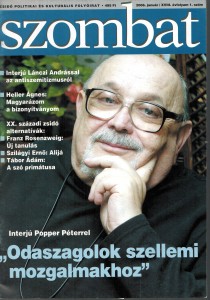