Attila Novák’s editorial was inspired by a short trip to Tunisia: he comments on the relationship between the West and Islam: “The words of Memmi become too quiet next to the multicultural battle cries which only take what it finds pleasant in different civilizations and cultures, and only those things which are easy to consume – both in literal and figura­tive sense: cooking, henna and music. Multiculturalism is a product of the West, and it has liberal democracy as a protec­tive shield safeguarding the harmony of its parts by stopping their aspirations for power. But the reality of being there wakes you from this dream.”

In connection with the editorial article we publish a selec­tion of articles discussing the statements – often inciting hatred – made by the Arabic media in connection with Israel and the Jews. Let us quote the words of Mustapha Muslim, a professor at Al-Sarika University. “Allah has now collected the Jews dispersed all around the world into Israel. He is lead­ing them to go there from every country, to give force to His universal law: the day of the last judgement shall come when the Muslims go to fight the Jews and the rock and the tree will speak: ”Oh Muslims, oh servants of Allah, there is a Jew hid­ing behind me, come and kill him.” If the Jews were all dis­persed around the world how could we find them to fight them?

Ferenc Olti. executive director of Inter-European Bank, a well known figure of the Jewish community, claimed critical­ly in an interview: “The state treats the Jewish community as if it was a homogeneous unit, simply because this is a com­fortable attitude. They believe that the only organization they have contact with – The Alliance of the Jewish Communities in Hungary (MAZSIHISZ) – represents and harmonizes all the different Jewish interests. But this is not the case. I, for example, at the time suggested that instead of the homogeneous rabbinical council, there should be separate autonomous ones representing the different movements. The Alliance of the Jewish Communities in Hungary is uncapable of and unwilling to contrast and harmonize within the organization the dif­ferent Jewish interests. Because this is not possible, the State needs to be influenced in a way that it does not only keep the one contact with the Jewish community.”

‘‘Why do you wear it” is the title of the selection of photos we publish on why people we asked at random inthe streets of Budapest wear Jewish symbols (the star of David, a Chai pen­dant, etc). Two psychologists, Péter Popper and Vera Békés H. expressed their views on this phenomenon. Péter Popper says in “Confessions about a silver hand”: “Why do I wear it? Because I have grown to like it through the years, it belongs to me like my glasses do. I am “Me” together with it. When will I stop wearing it? “Until the light of the Sun is extinguished, and the shadows fade.” That is until bedtime in the evenings or until the day when they take it off me.’

Maia Morgenstern Romanian-Jewish actress talked to Szombat in an interview about Marienbad, a play by Sholem Alechem which she performed in recently in Budapest, in Yiddish.

A German-Jewish psychoanalist. Karl Abraham examines the customs and prayers of Yom Kippur from a psychoanalitical point of view. The text was translated by the author of the accompanying study. Schmelowsky Ágoston.

In our literary section we publish László Kolozsi’s short stories and a review by János Pelle on two books written by Gábor Schein, as well as a study by Mária Ormos on Zsuzsanna Ozsvath’s monography on Miklós Radnóti. 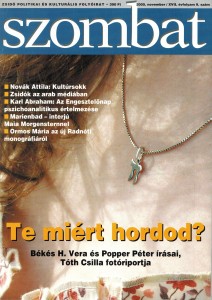