A selection of articles discusses the Gaza pullout. Zsuzsa Shiri’s report is followed by János Gadó’s analysis of the situation, then an Israeli author writes about the crisis of religious Zionism. Zsuzsa Shiri writes about the settlers’ putting on the yellow star as a sign of protest: “The settlers themselves disagree on the issue. In Neve Dkalim, S3 year old Mirjam Grosz came to the Gaza Strip 18 years. From Auschwitz she got to Soltvadkert, Hungary, then she went on to Beer Shevai. She has been forced to move home a number of times, but she never put on the star. – I have been there and I know what it means. I did not put the star on, beacause you simply can­not put into words the suffering we went through. ”

We publish an interview with the Israeli writer. A.B. Yehoshua. The author – representing the views of the Zionist left wing – explains: “Jews have been living in the diaspora for two thousand years, and surely they will be able to cope with this in the future. To me it is the Jews in Israel who really count as the absolute Jewish community. This way of thinking is the difference between myself and diaspora Jews. In every aspect of my life I experience mv being Jewish. I pay my tax to Jews, Jews can send me to fight in a war or into prison. An Israeli Jew can force others to leave their home, like we have seen it happen in the Gaza strip.”

We write about the scandal in Zagreb following the removal of rabbi Kotel Dadon from his position.

György Vári’s essay describes the lustrous past and rather som­bre present of the Jews in Riga.

Attila Novák interviewed György Bence, an important member of the one-time democratic opposition, a philosopher and political commentator. Mr Bence believes that: “Questioning the legitimacy of the elections and appointments now questions the legitimacy of the whole change of political systems. This is unacceptable for me. Similarly, it is impossible to question the process – unless some criminal act is uncovered – which resulted in the prominent representatives of the previous system recycling themselves to become leading capitalists. It would turn the present ownership system upside down.”

János Gadó followed up on how the famous Rumbach street syn­agogue was passed over to the Federation of the Hungarian Jewish Communities (MAZSIHISZ).

Steven Spielberg is currently filming in Budapest: we wrote about his earlier works and the difficulties of shooting a film here.

Dr. György Bán, executive vice-president and CEO of the Ronald S. Lauder Foundation gave an interview to Szombat on his meeting with Pope Benedict XVI.

We interviewed Zsuzsa Fritz, the newly appointed director of Bálint Jewish Community House. She has adopted a concept which is different from her predecessor’s, the House will host and sup­port various programmes and events organized by already existing organizations.

Agata Bielik Robson Polish-Jewish aesthete claims in her essay that the Dialectics of Enlightment by Horkheimer and Adorno is nothing but “a memento of a Jewish type: zachor. Zachor invites to remember things we would rather forget about, since Jewish think­ing is very much aware of the fact – from the Golden Calf to Freud’s psychoanalysis – that forgetting is easier than remembering.”

György Máté J. wrote about Api Weisz, the legendary Hungarian jazz-drummer of the 1920s and 1930s. 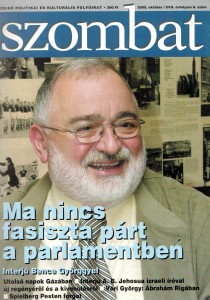