Writing about the controversies of modem Israel, Attila Novák describes the paradoxes determining the Jewish state in his essay, “Refuge of the dispersed?” He believes that “today, in the atomic age, when anti-Semitism has also become global, the chances of destroy­ing Jewry would increase if every Jew were to live in one specific part of the world. One or two Islamic bombs would be more than enough to destroy Jewry. People who are making efforts to end the Diaspora are making a grave mistake.”

Included in this month’s issue is an analysis of European public attitudes following the London bombings by Ildikó Eperjesi and a report on Egypt by Márton Csáki.

In his travelogue, Gábor T. Szántó describes his visit to Germany and the talks he gave in Berlin and Nuremberg, together with musings on the pitfalls of modem European Jewish identity and the “cult of remorse” among Germans and Jews, caused by Nazism among the former and the survival of the Holocaust among the latter.

András Heisler. president of the Federation of Jewish Communities in Hungary called upon managing director Gusztáv Zoltai to resign owing to the deficiencies in the economic management. Instead of resigning, however, Zoltai convened a putsch-like assembly, at which his loyal “vassals” consolidated his position. The president resigned and Péter Feldmájer was elected in his place. Feldmájer has already acted as president of the Federation between 1991-1999.

The media review offers an analysis of the anti-Israel bias in Hungarian media.

Pál Várnai interviewed Iván Bächer, the renowned writer and journalist, whose widely acclaimed stories are a reflection of the co­existence of Hungarian, Jews and Germans in Central Europe.

In “Confession”, Isaac Bashevis Singer notes, “I often write about being possessed by demons and sometimes about reincarnation. I know that there is no scientific evidence for these things, but I still believe in them. I have always felt that we are surrounded by powers for which there is no explanation. Sometimes, we manage to get clos­er to them. But what we see is always blurred and ambiguous.” Translator Katalin Dezsényi reviews Dvorah Telushkin’s book, in which this unknown text by Singer was published.

Péter Lajtai Langer, whose works illustrate this month’s issue, was originally a member of Péter Halász’s set. After emigrating, he became an Orthodox Jew. “We have inherited a jumble of feelings about our ties to tradition. The rise of scientific thought brought about by the Enlightenment impoverished the religious Weltanschauung. Religion became increasingly focused on outward appearances and engendered extreme emotions. Mystery and miracles gave way to pragmatic egoism and petty investigative details.”

Dávid Tarbay, Hungarian-born author and translator, who was recently awarded the President’s Prize for Literature, was interviewed by Zsuzsa Shiri. His book Eklipsis is reviewed by Márton Csáki.

Vera Surányi has contributed a report on the Israeli Film festival held in May, 2005, in Budapest. 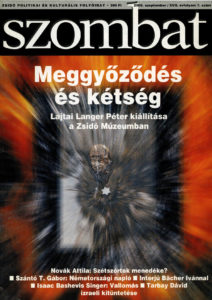