The December issue of Szombat begins with Uri Kozmosz’s essay – originally read in the course of a literary evening organized around the theme “Anna Frank in the World” – in which he explores Anna Frank’s relation to Jewish tradition, arguing that the Messianistic legends do have a relevance in our (post)modem age too. Pal Bacs writes about the Hungarian victims of the pseudo-medical experiments, and the fact that they have not yet received adequate compensation for their suffering. Miklos Fischer, the coordinator of the Jewish Community Centre recounts the events of the first few weeks since the opening of the Centre. The results, as well as the future tasks in the reconstruction of Hungarian synagogues are reviewed by art historian Ferenc David. Following the success of the Czech Shalom group, Anita Gócza has interviewed three Hungarian rock musicians – Péter Gerendás, Peter ’Sziámi’ Müller and Tamás Somló – curious to know whether they can envisage a group playing “Jewish rock” in Hungary.

A fierce debate has erupted in the uppermost echelons of Russian Jewry: Misha Chlenov, head of the Russian Jewish Community, has been accused of arbitrarily concluding an agreement with the World Jewish Restitution Organization, without consulting other members of the leadership. We have also included a survey of the current situation of restitution in Eastern Europe. One of our reports details how Kazakhstan has now estab­lished direct economic links with a number of Israeli businesses, while another maintains that Palestinian autonomy might not promote economic betterment in the West Bank.

By publishing Jenő Pollák’s study we wish to revive the time-honoured tradition of the droshe. In an interview given to Alfred Schőner, Benjamin Gat-Rimon recollects the pre-war years of the Budapest Rabbinical Seminary.

1994 marks the 70th anniversary of Franz Kafka’s death. His works are the first expression of modem Jewish sentiments and feeling, and in our supplement we pay homage to his memory. Philip Roth’s essay reviews the intimacies of Kafka’s life and the failures in his personal affairs; Joachim Neugroschel evokes the German world of Prague without which Kafka’s works cannot be understood, while Judith Stora-Sandor demonstrates the sarcastic aspect of Jewish humour, “the phony victory over genuine failures” in her analysis of Kafka’s short novel, The Metamorphosis. Adam István Rónai compares Kafka to Arnold Schonberg, finding that it is the ’’strive for completeness”, the belief in a God-given mission that binds them. Gábor R. Kállai reviews the topos of Jewish life which Kafka tried to flee, but nonetheless reflected on in his later writings.

We offer an overview of the films that were screened during the alternative minority film festival, ’’Divides”, that was held in Budapest in October. The December issue of Szombat is illustrated by the montages of excerpts from Kafka’s diary by Gábor Szerényi. 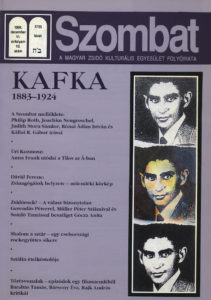