A controversial article was published in Népszabadság (Hungary’s largest distribution daily newspaper) by István Lovas well known extreme right-wing publicist. He claims that the Holocaust is over-emphasized internation­ally by Jews, because this allows Israel to hide its own sins. Our author Attila Novák reflect­ing on this article argues that the reason why the Holocaust has become the symbol of our civilization is because western culture takes its roots from biblical i.e. Jewish sources, and the concept of crime and punishment was inherited from the Bible. Anti-semitism is uncapable of handling this fact, so it tries to look for new content for its anger: this time the same old tune is interpreted in leftist, pro-minority thirdworldism. According to this theory Jews are the epitome of oppresive white European civilization who exert a pow­erful influence on the world.

The Budapest Jewish Community and the Federation of the Jewish Communities of Hungary held their electoral meeting. Both elected a new president, while their execu­tive director (the same person for the two organizations) was re-elected. (Both organi­zations have a rule the executive director is elected rather than simply appointed) The author of our commentary wonders whether the fact that the presidents were voted down, is a sign of democracy. However, the work of the previous presidents was not thoroughly criticised, the newly elected ones did not come up with a serious programme. This means only superficial democracy. The identity of a democratic community is defined by the fact that it is supported by its members. Hungárián Jewish organizations and institutions are mostly supported by the Hungarian State, and additionally by donations from Jewish communities outside Hungary. These sums are distributed through the appa­ratus, so as a matter of course the executive director as the first person of the apparátus accumulates the most power. His re-election could not be doubted.

Katalin Pécsi’s report takes a look at the life of Serbian Jews who have fled the war and are staying in Budapest. This group of some 300 people, many of whom arrived with nothing bút a small suitcase, are put up in a modest hotel with the support of the Joint and the Sochnut. The Jewish commu­nity provides them with free meals, the Jewish schools offer opportunities to study and play. Youth organizations try and invoive the younger members of the group in their activities. Various organizations have started to collect donations. The Hungarian Jewish community is helping these refugees, bút cannot solve the problem of their lives. Sochnut has taken many of the younger refugees to Israel for a few weeks trip. 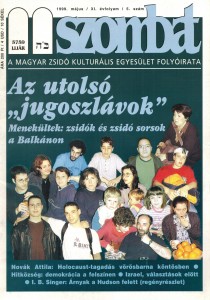