“The Vatican statement entitled ‘Let Us Remember. Thoughts about the Shoah’ issued in March 1998 attempts to address two issues at once: the remorse over the fate of the Jews and the preservation of the Church’s reputa­tion. This is an insoluble task: one cannot do penance and watch one’s reputation at the same time” – claims Rudolf Ungváry, writer, on the Papal encyclical letter, considering in from a Catholic point of view. Janos Pelle main­tains that “the Catholic Church is not directly responsible for the Shoah, but is guilty in its ideological ‘preparation'”, which, he argues, is proved by the hysteria of charges of ritual mur­ders in East Europe after the war and the defeat of Nazism. The charges of ritual murders have lived on in Christian environments for cen­turies. Ágnes Hankiss says that the descen­dants of the guilty cannot be held responsible for the villainy of their ancestors, yet selfimposed repentance is most noble, if it is sincere. This is reflected in the Papal encyclical letter, but is missing from the statements on the Shoah in Hungary.

The Hungarian Jewish Heritage Public Foundation was established to compensate the Hungarian Jewry for their stolen property dur­ing World War 11, since the compensation did not happen after 1945. The Board of Trustees of the Foundation manages the income of the seven items of real estate given by the state. This income is excepted to be about HUF 60 million ($ 3 million) this year. The Board of Trustees of the Foundation has announced an offer, stipulating that no Jewish organisation, only projects can be granted money. It has nonetheless bound itself already to pay about HUF 25 million ($ 1.2 million), that majority of which will be given the Holocaust survivors under the age of 60 (non-eligible for supple­mentary pension) in the amount of HUF 10,000 ($ 50) per person.

In our Supplement we commemorate the fiftieth anniversary of the State of Israel. In their essays, Amos Oz and Alan Dowty pre­sent the democratic, self-organising and effi­cient community, the Yishuv, which existed prior to the birth of the State. The Yishuv was crucial in the fact that the State was able to solve the formidable tasks it had to face: the organisation of the state, the integration of the refugees, and the war of self-defence. Yehuda Lahav’s article presents the education system of the country illustrating the sharp difference between the religious and secular state schools and the independent school system being formed which is in fact the school network of the Sasz Party. In the latter institutions the pri­ority given the social considerations and the fact that the secular subjects are relegated to the background by the religious education result in the poor quality of education, which reproduces inequality. Gábor Kiszely gives an overview of the 50 years of the Israel literature. He concludes that writers in Israel “express their not in the least reassuring perceptions, experiences, and anxieties without fear in a community which despite being threatened is free of millennia-long dread. They speak, warn, and caution without writerly circumlocution.”

We publish the second part of György Konrád’s essay entitled “Aphorisms on the Durability of the Jews” in our literature column. 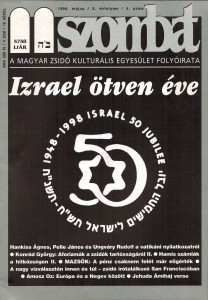