The May issue of Szombat begins with a critical essay by Miklós Szalai who calls attention to the impossibility of a dialogue with fundamentalism (including the Jewish variety) and calls for the creation of an independent, secular Jewish identity. The editorial reply to this essay points out that Szalai seems to bracket religion with fundamentalism, while György Tatár challenges the justification of drawing such extreme conclusions from any critique of religion, no matter how justified it might be. This exchange is followed by a review of the first Hungarian conference on Jewish music that was held recently in Budapest

In his writing, entitled “Im a Gypsy”, János Dési speaks out about the moral obligations that spring from a minority life: our Jewish experience should make us sensitive to the difficulties encountered by other minorities, in this case, the Gypsies.

We offer a broad survey of the problems faced by Anglo-Jewry, the most serious of which is undoubtedly the gradual progress towards assimilation, followed by an overview of the dispute between the World Jewish Congress and various Swiss banks over the fate of Jewish assets that were deposited there during World War 2.

The Knesset has recently promulgated a law that makes Yiddish a cultural heritage to be protected by the State of Israel; and we have therefore included retrospect on the debates that raged at the turn of the century whether Yiddish or Hebrew corresponds better to an authentic Jewish existence. Also included in this section is a brief review of the post-1940 history of the famed YIVO Institute of Vilnius.

In our ‘Tradition section Gábor Búzási discusses various Christian sources that show that the idea of rebuilding the Temple in Jerusalem was seriously considered during the reign of the Emperor Julianus. In contrast, Jewish sources from the same period are silent on this matter.

In our History section we publish ten denounciating letters written between 1962-65 by Endre Sós, the then leader of the Jewish Community, to the State Church Office, which appeal for “liquidation of the Zionist venom”, the appointment of officials who are loyal to the state and, also, about possible that might be taken against Alexander Scheiber, the director of the Rabbinical Seminary. This section is rounded off by an interview with historian László Csorba over the to the denounciations.

In her essay, Ágnes Heller reflects on the de-Judaization of Hungarian novels and what happens when the author expunges the Jewish features of his characters for the sake of a universal message. Finally, we offer an overview of films that address Jewish themes and of Jewish film festivals. 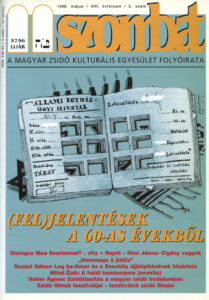