The March issue of Szombat begins with an essay by Ákos Kertész in which he recalls how he de-Judaized one of the main characters in an early novel. Kertészs essay is followed by a report on the General Assembly of the Alliance of Hungarian Jewish Communities (MAZsIHISz) at which it was decided, in the course of a five hours long debate  not lacking a variety of personal remarks!  that a public fund would be set up to manage the properties, etc. handed back to the Jewish community by the Hungarian state as part of the compensation. Also included in this section is an interview with two students from the student home of the Jewish gymnasiums, with questions ranging from how they like their school to how they relate to their Jewish roots. The debate over László F. Földényis book continues: János Pelle too agrees that one cannot speak of the Nazis and their age solely from an aesthetic point of view, an unequivocal judgement needs to be passed. Földényi rejects this criticism on the grounds that there can be no doubt as to what that judgement is, claiming, however, that is unnecessary to repeat this on each and every page.

In our World section, Abraham Schwartz, one of the leaders of Argentine Jewry, speaks of the problems faced by this community; also included in this section is a report on compensation in France, Bulgaria and Norway.

How grave are the conflicts between the religious and the secular in contemporary Israel, is the main theme of the interview given by Amos Oz to Der Spiegel. Philosopher György Tatár considers the conflict and the tension to run deeper than suggested by Oz and proposes that it is the secular Israelis who should try to approach their religious compatriots since a similar rapprochement can hardly be expected from the latter. This section is rounded off by a review of some anti-utopias predicting the explosion of Israeli society.

In our section on Jewish tradition we publish an essay by Tamás Visi, who vehemently disagrees with the foreword to a recently published edition of Philo of Alexandrias Life of Moses which in Visis view presents the unsuspecting reader with a de-Judaized Philo, reflecting outmoded Christian concepts.

In our cultural section we publish a writing by Professor Miklós Szabolcsi, who has turned seventy-five this year: his essay evokes the new Jewish generation who appeared on the scene at the turn of the century. In his essay on the solitude of the mama-loshen of Gennady Eistrakh, the Yiddish writer who emigrated to the States, Pál Várnai also addresses the problems of defining what constitutes Jewish literature, quoting several examples from Canada to Hungary. Also included in this section is a selection of the writings of poet and novelist Tamás Simon, who died when he was barely twenty. 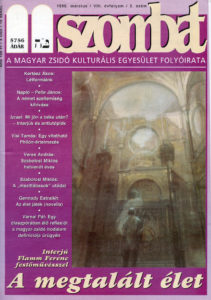