The January issue of Szombat begins with György Konráds essay. “Jewry has three choices: the paths defined by the national, the religious and the universalistic concept”, concludes Konrád. His essay is followed by a report on the work and the beneficiaries of the Joints Jewish Social Help Fund. An agreement has been reached between the government and the .Alliance of Jewish Communities of Hungary that the survivors of the Holocaust will receive a total of 4 billion HUF (c. 25 million USD) in the form of compensation coupons: 1.2 billion HUF (c. 7.5 million USD) has been earmarked for 1997.

“There is no point in replacing the leaders since this will hardly lead to changes in the system”, opines Jiszrael Davidovich from his study of the organization of religious Jewry, who has returned to teach in Hungary following a longer stay among the Lubavitscher Hassidim. “Religious Jews find it easier to adapt”, explains Rabbi Lajos Jicchak of Jerusalem, speaking about the youngsters who have made aliyah from Hungary. In her essay, Viktória Lugosi writes about the dissimilant Jewish Chanukkah-Christmas complex.

Being Jewish does occasionally bring political rewards in Germany and Austria, as shown by the case of Peter Sichrovsky, the Jewish essayist and writer who has teamed up with the extreme right movement.

In our section on Jewish tradition we have collated Orthodox, Conservative and progressive Jewish opinions. “Our responses to the changing world around us are determined by the Halacha”, maintains Jonathan Sacks, the Orthodox Chief Rabbi of Britain. “We interpret tradition in the light of the changes in the world”, says Fred Morgan, a Reform Rabbi in London. “Change and modification are not contrary to the spirit of Jewish law, but we have to tread carefully”, runs the declaration of American Conservative Jewry.

Included in this issue is an excerpt of Pál Bárdos new novel, Moses, the Egyptian and a tribute to Pál Erdos, the renowned mathematician, who has sadly left us. The January issue of Szombat is illustrated by István Engel Tevans drawings. 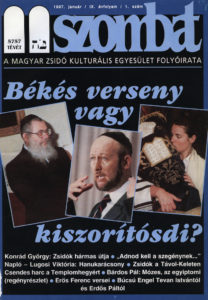