Our magazine has organised a three day film festi­val which presented close to forty Hungarian films on Jewish topics. Our February issue contains a summa­ry of the conference related to the festival. On the basis of the lectures one can draw the conclusion that Jewish characters rarely appear on films as whole per­sonalities. The pre-war film-making, in which man­agers, directors and actors of Jewish origins played a significant role, avoided the direct treatment of the issue, though one can easily recognise Jewish traits in the ever recurring figure of the awkward petty bour­geois. After the War and the Shoah, Jewishness became – or rather remained – a taboo. In many films showing or referring to the period of the strengthen­ing of Fascism we can see characters whom we sus­pect to be Jewish, but they are not named. Persecution is often mentioned, usually without say­ing that their target were Jewish. The final inference of the films, which are often of high quality, is that Jews and Hungarians are one in persecution, resis­tance, and in liberation. While many post-war Hungarian literary works have relentlessly disclosed the 1944 failure of Hungarian-Jewish cohabitation, in films it is present only in a very subdued manner.

The senior research fellow of the Hungarian national Gallery, Dr. László Mravik has recently compiled a large volume: Sacco di Budapest (Looting of Budapest) is an itemised list of the sev­eral thousand works of art forcefully taken away by the Soviet Army from Budapest in 1945 and still kept in Russia. Two thirds of the most important Hungarian art collectors were Jewish. How there seems to be some chance that certain pieces of their collections will be returned, since the head of the Russian delegation at the Washington confer­ence dealing with the robbed Jewish property assured those present of their willingness to coop­erate. Hungarian national collections also hold many works of art which the Nazis and their Hungarian accomplices stole from Jews in 1944, and which the original owners did not claimed back in 1945.

“That I am Jewish, everybody knows. But why should I always write about this?” – asks György Faludy, writer, poet in his interview. Faludy foreseeing the near future left Hungary in 1938. He returned in 1945, and between 1949-1953 he suffered the Communist persecution: he was a prisoner at the infamous Forced Labour Camp of Recsk. He emigrated again in 1956. He wrote his most well known work, My Happy days in Hell in English, in Canada. Since 1989 he has been living in Hungary again.

Dr. Péter Feldmájer, President of the Federation of Jewish Communities publicly accused the Hungarian Rabbinical Body, because they have failed to issue 5-6 letters of divorce for years. As it turned out, there is no one in the Hungarian Rabbi­nical Body who would be qualified to do this. In their reply, the Rabbinical Body rebuked the President, but did not deal with the substance of the issue. The debate which has been taking place for months in Új Élet, the weekly of the community might influence the “changing of the guards” in March – writes our author. Accortiing to the news, National Head Rabbi, dr. József Schweitzer, who is most seriously concemed because of the accusation, would be pleased if instead of Péter Feldmájer a new president were elected.

The KÚT Foundation deals with curing post-traumal Holocaust-syndromes. At the conference organised by the Foundation several lectures called attention to the fact that Jewish psychologists and psychiatrists who – understandably – have gained significant experience in treating post-traumal syndromes can successfully treat people who have suffered psychic injuries due to other trauma, such as the victims of the wars in the former Yugoslavia. 1956 Hungarian emigres also often got into depressions due to the feeling of homelessness and rootlessness.

In our literary column, we publish Giorgio Pressburger‘s story, “The sin and the Snow”. Pressburger was born in Budapest, and now lives in Italy. A recurrent theme of his works written in Italian is the Budapest childhood and the persecutions. 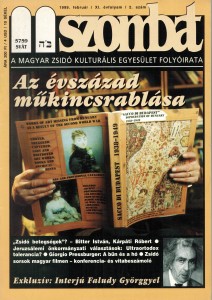