From this year on the 120-year-old Rabbinical Seminary of Hungary bears anoth­er name as well: Jewish University. But in order to be officially acknowledged as a uni­versity, the institution has to undergo the process of accreditation first. Rector Alfréd Schőner in planning to set up six new chairs which would be directed by people with appropriate academic training and degrees. Unfortunately, due to the assimilation process of the past forty years, the number of well trained researchers who would be candidates for such positions is very small – said Professor Schőner in an interview given to one of our colleagues. Therefore, some chairs may have to operate jointly, and lec­turers may have to be invited from Israel.

We continue our series on Zionism with a piece by Aliza Shenhar, the ambassador of the State of Israel to Russia. Israel has so far been the political center of the Jewish world. It has by now become clear that the Diaspora will not cease, and therefore Israel has to give up polit­ical Zionism for the idea of cultural Zionism, advocated once by Ahad Ha’am. Israel has to preserve its central role in the Jewish world pri­marily culturally – says the author.

After 1938 the importance of Zionism, which was previously only a relatively mar­ginal movement in Hungary, grew rapidly. This growth was caused by mainly two reasons: the anti-Jewish acts passed in that year, and the fact that Zionism was much stronger among the Jewish population of the territories which were attached to Hungary after 1938. Hungarian authorities, however, opposed the upswing of Zionism, and thus by 1942 all kinds of Zionist organizations and activities were banned and forced to operate underground, except for the officially acknowledged Central Office – we learn from the study of the historian Attila Novák.

Zionism and the existence of the modem State of Israel is a great challenge for the adherents of traditional Judaism and has provoked various reactions from them – we read in the second part of the article of Gábor Balázs. Whether they are radical anti-Zionist, pragmatic or radical religious Zionist, all of these groups claim to be true followers of the Torah.

Our colleague János Gadó shares with us his impressions of the thirtieth centennial Zionist Congress. There is great ambivalence between the active and committed atmosphere of the Congress and the reluctance of the Israeli press. The idealism and enthusiasm of Zionism is still there, but it is strongly influenced by the ongoing controversies which divide the Jewish worid, those living in Israel as well as in the Diaspora – he says. 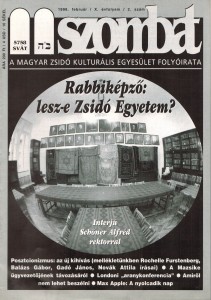