The February issue of Szombat begins with an essay by Péter Feldmájer, the leader of the Jewish community, on the reception of the Jewish religion, the occasion being the 100th anniversary of this felicitous event. He probes the question of whether religious Jews are not disadvantaged in certain respects in the secular Hungarian state that had absorbed a number of Christian traditions (e.g. their holy days are workdays). A lengthy report describes the general assembly of the Budapest and of the Hungarian Jewish Community, where the following questions were discussed: the problems of Jewish religious education, the real significance of the post of national chief rabbi and the lack of the collective stand of the rabbinical council, the differences in attitudes to restitution within Hungarian Jewry, between Hungarian and foreign Jewry and between the representatives of Hungarian and foreign Jewry and of the Hungarian state. We also present those who have been honoured by the Yad Vashem.

Also included in this months issue is an essay by philosopher Mihály Vajda who, taking the example set by Hannah Arendt, examines the problems in accepting ones Jewish roots. Sociologist Jonathan Webber examines the false clichés in modern Jewish mainstream consciousness (e.g. that assimilated Jews who maintain no links with each other are still called a community, not unlike the community that was in the past confined to a ghetto). Two writings shed light on how the Internet is affecting, and perhaps changing, Jews all over the world. Another writing describes the obstacles our US correspondent came up against when he tried to interview senior officials of the Joint Distribution Committee.

In our section on Israel we publish a report on the social impact of the new ruling on conversion to the Jewish faith brought recently by the High Court of Israel. Two short writings are devoted to a new phenomenon in the Israeli tourist business, the zimmerim, and on the chances of Israeli sportsmen at the Atlanta Olympics. Another report deals with Hamas and its deep-running social acceptance in the Islamic world.

In another section we publish a study by Péter Erdo, professor of the Roman Catholic Theological College, on the opposition to mixed marriages within the Catholic Church through the ages.

A special supplement is devoted to the conference on Jewish literature, with a brief review of all twenty-three papers read at this conference, and a more detailed report on the round-table discussion (not lacking elements of high drama!) of Hungarian Jewish writers who could agree on one point: that while accepting their Jewish origins, they nonetheless consider themselves Hungarian writers. We publish in full Iván Sanders essay, the Jewish reading of a contemporary Hungarian novel. 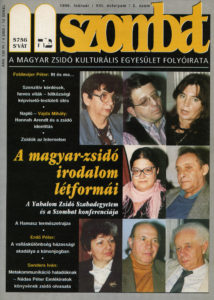