When will the Swiss Fund for Needy Holocaust Survivors start allocating payments to Hungarian Holocaust survivors? In September Gusztáv Zoltai, the managing director of the Federation of the Jewish Communities in Hungary was talking about a payment of one thousand dollars per person in November, quoting the promise of Zvi Barak, the Jerusalem representative of World Jewish Restitution Organization. This statement proved to be inaccurate. Representatives of the WJRO and the Hungarian Jewish Heritage Fund held a meeting on November 16th and tried to work out methods for allocating the funds. Representatives of WJRO suggested that a committee at par should be set up to decide over each individual request of Holocaust survivor. Representatives of Hungarian Jewry, however, persisted that support should be granted to all survivors. The payment of 400 US $ promised by the WJRO was only accepted by them as an advance payment. As the suggestion of the WJRO was rejected, the representatives promised to try to work out a new plan which would be more considerate of the wishes of the Hungarian party. Thus the WJRO would not have the right of decision, only of control. In an interview to Szombat Rolf Bloch, the representative of the Swiss Fund confirmed that the 1000 US $ will, indeed, not be granted to everyone.

Our Foreign Affairs section deals with the Jews of Slovakia. The article of Sándor Bacskai deals with the history of the Orthodox Jewish community of Pozsony (Bratislava/Pressburg). It was an esteemed community already in the 18th century and reached its zenith during the decades when the legendary Chatam Sofer was its rabbi. Pozsony had many influential rabbis even after the Chatam Sofer and was a major spiritual center of traditional Jewry up until World War I. It’s importance in Central Europe started to declined after World War I and it disappeared after World War II completely. Survivors of the Holocaust, the last representatives of pre-war Orthodoxy left the city in 1968. Eliyahu Katz, chief rabbi of Pozsony until 1968, now a rabbi in Beer Sheva tells us how Jewish life was made impossible to live during the Communist regime. Gábor T. Szántó reports about the life of Jews living in Slovakia today (one time Upper Hungary). The older generation, mostly Hungarian speaking Jews are very careful not to be suspected of sympathizing with Hungary. The more dynamic middle generation has decisive influence in community life today. Members of the young generation speak mostly Slovak. Those who care about their Jewish identity are mostly Israel-oriented.

To what extent are philosophy and Jewish tradition compatible? Isn’t it because of the incompatibility of the two traditions that Jews have started engaging in philosophy relatively late? – asks Tamás Staller in his essay.

We regret that in the English-language summary of our previous issue we misspelled the name of our contributor Professor G. M. Tamás, the author of the essay “Jews, Conservatives, Prophets.” 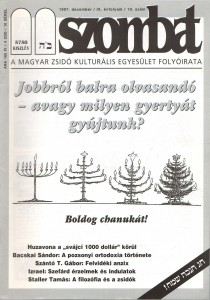