It was reported without much media reaction that the gypsy population of a small Hungarian vil­lage converted to muslim religion. János Gadó’s editorial dicusses in detail the neglected back­ground of the case. I, today’s world it is mostly the so-called “loosers” of modernization who are attracted to the radical ideology of islamic religion – the example of African Americans demonstrates this tendency. Today, after the fall of communist regimes, islamic religion presents the strongest anti-West ideology. The above mentioned case of Hungarian Romanies should be interpreted in this context. Even that well meaning, but slightly naive ideology in the defense of minorities which inter­prets their disadvantages only as a result of the excluding attitude of the rest of society enhances the spreading of radical ideas among minorities.

György Rózsa reports from the assembly of the Orthodox Jewish Community of Budapest. The assembly practically only dealt with the President’s expose: the 50 mostly elderly partici­pants accepted by vote without comments the 400 million HUF (2 million USD) budget and the election of new functionaries due now has been postponed for two years. The President of the Community who has been in his office for 34 years claims they have 15 000 members, though there is never more than a few dozens of people on Saturday in the three orthodox synagogues in Budapest (and this number includes visiting for­eigners as well). But the president considers those orthodox people and their offspring to be part of his community who have left the country.

We are publishing a report of the assembly of the Budapest Jewish Community and the Federation of the Jewish Community of Hungary, about the election of representatives and new functionaries, and at the same time we examine the background of these events. Vera Surányi’s article about Berlinale ’99 assesses films dealing with the Shoa and some others about racism and discrimination.

Pesach has to be experienced like a contempo­rary drama – says Chaim Levy in his article “Why Pesach is the crown of all celebrations”.

The title of our Polish supplement is “After “68”: it examines the last 30 years of Poland’s Jewish community. Pawel Spiewak’s writing “After March” tells us about the anti-zionist campaign of 1968 which pursued from Poland the last of the remain­ing Jews, tens of thousands, including members of the intelligentsia, army officers, and high rank­ing officials. An extract from Henryk Grynberg’s novel Private Life recalls episode from the history of the national Jewish Theatre that had a licence and the approval of the Polish State before 1968 – that was the only institution though, and its pur­pose was to disguise official anti-semitism and show off in front of the West. Their budget was mostly provided by the American Joint. ‘Leave us alone’ shouted some people in a small town as the actors of the group were stepping off their bus. ‘Our sheer presence seems to disturb them – explains a friend to the surprised writer.

We are publishing the first part of Lajos Pálfalvi literary historian’ study Jewish Subjects in Polish Literature’. One of the remarkable parts of this large scale study: Julian Stryjkowski’s novel Voices in the Dark(?). The novel is a monumental attempt to create a memorial to the destroyed Jewish pop­ulation of Poland: it is a mixture of many charac­ters and locations, as if the writer was trying to fit all of his destroyed people into one single novel. 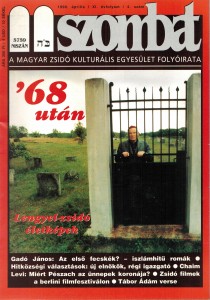