The April issue of Szombat begins with György Konrád’s essay, “Aphorisms on the Durability of the Jews”, in which one of the most acclaimed contemporary writers of Hungary – who acted as the president of the International Pen Club until 1997 – notes that he sees “as Jewish this transcendent, surpassing passion, the ability of individuals to break away from their environment, to achieve distance, and to be able to view their own world ironically”.

“I belong to Hungary: this is my culture, this is where I grew up” – is the key theme of the interview given by Iván Pető, the recently-resigned former president of the Alliance of Free Democrats, the leading liberal party of Hungary. This party is often identified with Jews by the extreme right.

The Hungarian Orthodox Community has recently held its annual meeting to review the community’s accounts. However, instead of an overview of the community’s assets and liabilities, the president, Hermann Fixler offered a series of moral admonitions and histori­cal overview, and thus continued the traditions of the Socialist period.

An anonymous letter is accusing the leaders of the official Jewish Community of protecting one of its employees who fraudulently took almost ten million forints (50.000 dollars) with forged accounts. A photocopy of the false accounts could be found in the envelope of the letter. The leaders of the Community recognize that the accounts are false, but they claim, they were misled as well.

The Jewish community in Italy has also experienced the division which has beset the Jewish world since the strengthening of the ultra-Orthodox. The Jewish school in Milan has started applying much stricter admission crite­ria: only students whose mothers are Jewish are now admitted.

In the Islamic countries and, although to a lesser extent, in the Third World, Israel is regarded in much the same spirit as the European Jews were at the turn of the century Europe: the general population, which only perceives the disadvantages of modernization, has made a scapegoat of the country, blam­ing their plight on Israel. This is the main conclusion of János Gadó’s arti­cle: “The Martyrs and the Monster”.

A new play, Animus and Anima, by Csaba Kiss, premiered recently in Budapest. The play is based on Géza Csáth’s Freudian-inspired psychological essay, analyzing the mental disorders of a Jewish woman arising from her sexuality. 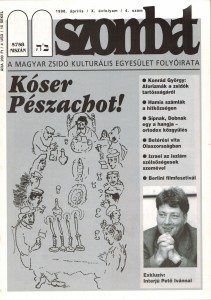