The March issue of Szombat begins with an essay by Árpád Göncz, President of the Hungarian Republic, entitled „The echelons of soid-searching”; the essay, writtten on the occasion of the 50th anniversary of the Hungárián Holocaust and with a view to the upcoming parliamentary elections, contemplates the shared responsibility for the successful transition to democracy and notes that only the success of this process can check the resurfacing of savage ideologies. Péter Boross, the Prime Minister of the Hungarian Republic, gave an interview to Gábor T. Szántó, editor-in-chief and Éva Szécsi, editor. ”I bow my head before the victims of the Holocaust,” said the PM, who opined that extremist attitudes had in fact previously also been present in Hungarian society, but had been suppressed by the dictatorial System. Now, with the advent of democracy, these attitudes have surfaced again. However, stressed the PM, there are no forces that seriously endanger Jewish life in Hungary. Were it not for the survivors of the Holocaust still living among us, said the PM, he would regard Jewish sensitivity unreasonable, but in this case it must be treated with understanding. Mr. Boross considers the current laws protecting the minorities adequate, similarly to the judicial practice which, however, must be strictly separated from the legislative process. The PM expressed his hope that the board of the Jewish Restitution Fund can be formed while his government is still in office, but also noted that a consensus among the various Jewish organizations must also be reached in this respect.

Leaders of the various Jewish organizations met with the Prime Minister in mid-February and talked, among others, about the anti-Semitism that occasionally crops up in ceilain prograinmes of Hungarian public service television, about the obstacles that need to be surmounted before the Jewish Restitution Fund can be set up, as well as about the persons to be included in the Holocaust Memorial Committee.

We asked eight political parties, as well as the group of independent MPs about whether they considered the laws and regulations protecting the minorities to be adequate, about the necessity for a laws sanctioning the denial of the HolocausL their víews on the compensation laws that have been enacted to date, as well as about the Jewish Restitution Fund that would serve the collective compensation of Hungarian Jewry and which, according to an earlier ruling of the Hungarian Constitutional Court that quoted a still effective, but hitherto not applied law, should have been called to life until December 31, 1993.

Tamás Isépy, State secretary of the Ministry of Justice talks about the stand taken by the government in the negotiations over the establishment of the Jewish Restitution Fund. He opined that it is the Jewish organizations that have to reach an agreement over the progortion of persons delegated into the board of the future Fund.

We feature an interview with the three founding members of the Sim Shalom Reform Jewish group, the first newly-founded religious movement since the political changes, who talk about their spiritual quest.

Also included in this issue is the programme of the Day of Jewish Culture, organized by the Hungarian Jewish Cultural Federation, to be held during the Budapest Spring Festival, which includes plays by the drama groups of the three Jewish schools, film screenings, arts exhibitions, concerts, dancing, and a discussion on the nature of Jewish humour, as well as a literary evening organized by our paper, the Szombat Saloon.

We offer a survey on the position of women in various Jewish communities around the world, about their rabbinical activity, and on the functions between Judaism and feminism.

In our section on Jewish traditions we commemorate Zayin Adar and we have included a selection of Aggadot from Bialik-Ravnicki’s Sefer ha-Aggada, as well as an essay by Ágoston Schmelowszky on the position of Jewish women as reflected by the sources of Jewish tradition. The section on history features a chapter from Sholomo Avineri’s The Making of Modern Zionism whose Hungarian translation will soon come out.

We have published excerpts from Michael Blumenthal’s novel Weinstock Among the Dying, as well as his poems and an interview with the author, who is currently in Hungary on a Fulbright Scholarship, holding lectures on American Jewish literature. Also included is an interview with Steven Spielberg about his newly-discovered indentity, the occasion being his new film, Schindler’s List. The March issue of Szombat is illustrated with Pesach Aggadot. 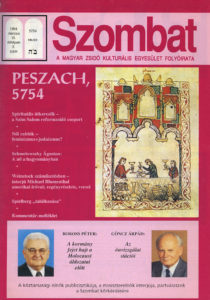 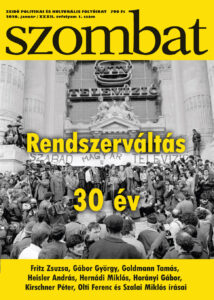